The term “robot” is derived from the Slavic word “robota”, which means forced labour. The robot itself is nothing more than a programmable mechanical arm that is controlled from a computer system, the robot controller. A MIG welding robot holds a welding torch and manipulates this around a work piece in a similar way as a human welder.

A robot/industrial robot is an automatically controlled, freely programmable, multi-purpose manipulator that can be programmed in three of more axes, is used in automation systems, and can be either fixed in place or mobile.

The robot consists of:

This includes all external axes controlled by the robot controller.

Traditional robots are still extensively used for arc welding. However dedicated arc welding robots have some benefits. The upper arm accommodates the welding hose bundle. This arrangement offers higher protection to wear and tear compared to the traditional dressing method where the hose bundle runs over the top of the upper arm. In addition it facilitates robot programming since the programmer does not need to consider the hose bundle which could otherwise get snagged up in the assembly or fixture. A fringe benefit is also that the Tool Centre Point (the reference point for programming, in this case the end of the welding wire) is more consistent due the better guided and shorter hose bundle. This in turn can give a quality improvement when welding conditions are critical.

The working envelope of a robot is shaped like a fist and when it is floor mounted the maximum reach is usually in line with the motor for the lower arm joint. For this reason the robot may be placed on a base frame. The envelope of the robot will extent in a circular motion and the work piece will be placed inside the working envelope. The area at the top is wider and this is the reason to invert the robot if it has to weld an assembly that is too wide to fit into the envelope in front of the robot and if a long reach robot is not suitable for reaching into the assembly. 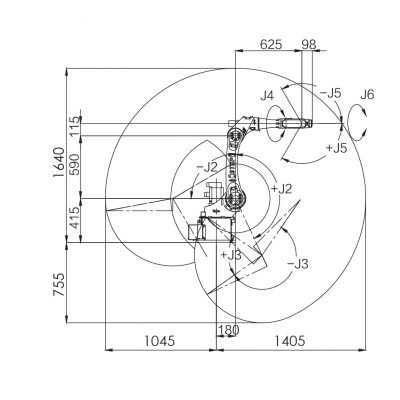 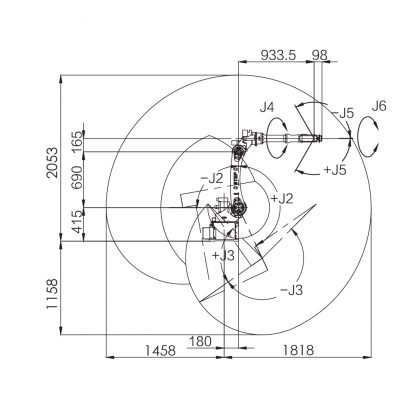 Inside the cabinet is a power supply, a PC based computer, servo amplifiers and communication boards. These can be simple I/O boards or field bus boards. The welding interface is via the traditional analogue interface card or the more modern fieldbus or Ethernet interface. The robot motion control software of most industrial robots is based on VXWorks wiith some sort of robot programming language interface or alternative software to make robot programming user friendly. The system also comprises a teach pendant which is used to program the robot.

The articulated arm of the robot has 6 degrees of freedom or axes, which are driven by electric, brushless AC motors from the robot controller. These are referred to as axes 1 to 3 for the major axes and as axes 4 to 6 for the minor axes. On the teach pendant are six jog keys, which are clearly marked so the user will find it easy to identify the correct one. The KUKA controller is unique in as much that it features a teach pendant (Smart Pad) which in addition to the jog keys, has a Space Mouse that allows the user to select any of the robot axes from a single control knob. 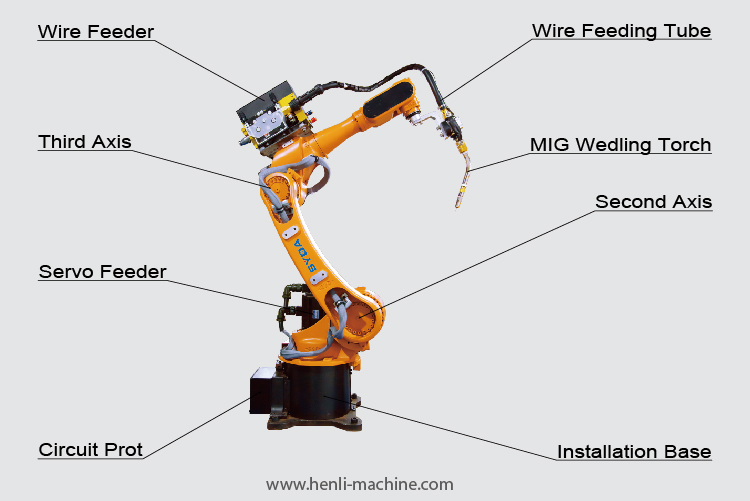 Robot manufacturers will specify the relevant speeds for each of their robot axes. In an arc welding robot program there are often very small moves between welds and these do not allow the robot to reach maximum speed. The most important factor is for the robot to accelerate as fast as possible, reach its maximum speed and then decelerate to the next welding position as quickly as possible. This kind of control is taken care of within the dynamic model that is part of the the motion control software. The software also considers the weight of the tool at the end of the robot arm, and additional loading such as the wire feeder, friction in the joints and any other external forces that act upon the robot such as gravity. This dynamic model also ensures that all the motors work in harmony with each other resulting in good path following accuracy and very high positional accuracy.

Generally the speed of the robot is restricted to its slowest axis and for that reason it is a good idea to select “point to point moves” for air moves between welds. In this mode the robot will move to its programmed position in the fastest possible way. In some robots the path may vary depending on make.

All modern robots feature AC servo motors and these have the advantage that the control system will remember the relevant position of the robot, even after a power cut. These motors are capable of driving the robot very quickly and accurately and stop where required without undesirable vibration or backlash. The servo motors are controlled from servo drive units inside the robot controller. They control the speed in relation to the distance from the desired point which requires the use of tachometers to monitor the velocity and encoders or resolvers to monitor the position. The programmer does not get involved in the detail of how the robot does this and merely uses a teach pendant to instruct the robot what to do.

The computer inside the robot controller does not only run the motion control software, but also the welding software that provides the robot with a flexible interface to the welding power source. In order to achieve high quality welding it is important that the robot can accommodate different welding conditions. Without this software it would, for instance, be very easy to burn through thin materials or have a cold weld on heavy welding applications when starting the weld. Hence the software can mimic the skills of a manual welder and is extremely comprehensive. Once the welding parameters have been fine tuned, they are stored and called up for that particular joint condition inside the robot program. Generally the parameters are stored as data that divide the weld into tree sections: start data, main data and end data. The number of parameters that can be selected are extensive and include the following:

The more modern approach is to rely on the comprehensive welding software that is resident in the power source and most customers prefer this kind of interface since it makes robot programming simpler. In addition it is less likely that the operator will corrupt any welding programs. One of the advantages of this kind of interface is that it is easier to identify any faults since the tasks are clearly identified with the robot being responsible for moving the torch and the power source being responsible for the process. This principle of interface works as follows: